Here's what I got done the first day. It was difficult at first to get the shape of the base as it is very specific. Thankfully I found someone's blueprints online and used them as a template. A minor problem arose rather quickly though: the scale of the drawings wasn't consistent between views (front, side, etc.). Thus, some of this is guesswork.

I then started adding the "orbs" (as you can tell by the screenshot I labelled them as "balls"), which was horribly annoying. I'm sure the professional 3D modeller knows ways of making this kind of thing straight forward, but I basically created a column of four, added a plane that lined up with them in back, and used that to determine the angles at which to place the orbs. I then decided to cheat a bit by covering one side and then mirroring everything along the x axis. I still need to make a few adjustments to the front orbs, but overall, I'm content. The camera will be flying by so quickly that it won't really matter if every detail is perfect... something I should be constantly reminding myself of. 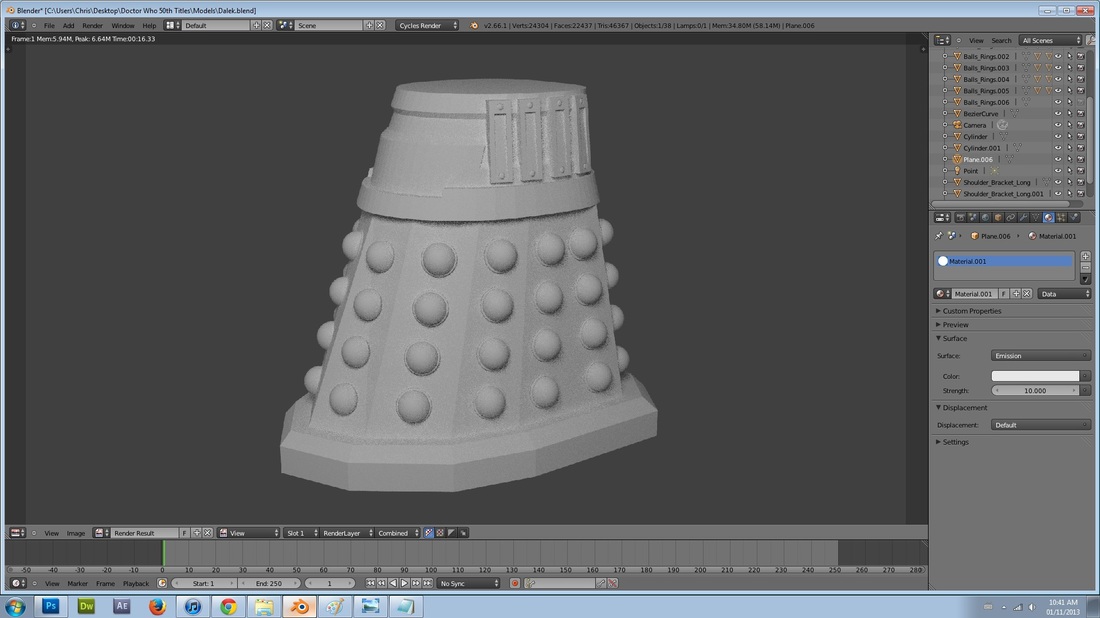 More progress. I haven't completed the front yet because I want to get the basic structure up before focusing on any major details. Some of them I have gotten out of the way though, to either mix things up and keep my interest, or because they were so simple to do that it was best to get them over with. 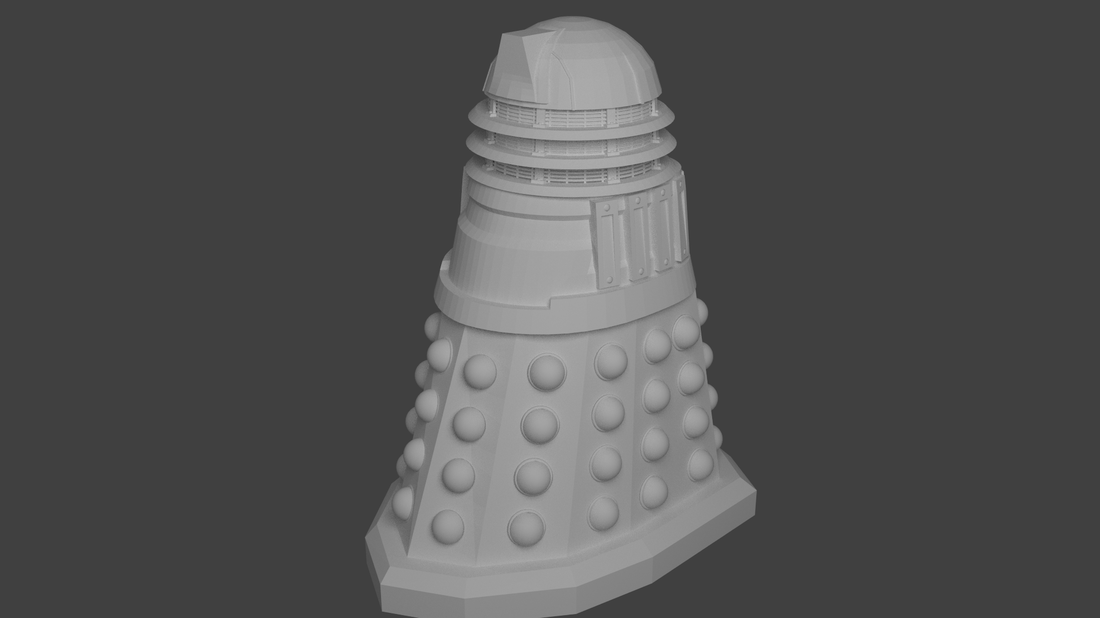 The top semi-sphere (the "head") has been causing me a lot of trouble. I didn't create enough rings for the sphere when I generated it, so it looks very flat, and subsurfing rounds out the complex geometry produced by the grooves I added. I should have done that after rounding out the basic shape... I guess I'll have to start that over, but I'll wait a little longer.

Added the eye. I really dig how this turned out. I can't wait to texture it.

School is sapping up much of my time nowadays. I cannot wait to complete this project...

I've finally added the two arms. I need to adjust them slightly still, but for the most part they are complete. One thing I need to decide on is how the arms are attached to the spheres that act as joints (see the third image from the last update). Why? Because there are alternate designs, and the differences aren't subtle. Tonight I'll try and pull an all-nighter and finish at least the modelling.

Nearing the end. I've spent the last few hours fixing the orbs and shoulder bars, as well as grouping meshes and organizing everything. I've added the "antennae" and replace the head piece with a new sphere - the problem concerned smoothing. Basically, I had created the grooves using a Boolean modifier, but because I also had to smooth the surface, when I did so it made things look really horrible. So what I'm doing is smoothing the sphere first, and THEN adding the grooves. Hopefully that will cause less problems.

If that works out well, then I'll only have a few more slight adjustments and then I can move on to TEXTURING. Yay!

I've been working on the headpiece. It's probably due to inexperience, but I had to remake it like 4 times before I got something satisfactory. That being said, I'm ready to move onto texturing. I'm keeping my fingers crossed hoping that it will be more straightforward than modelling.
Powered by